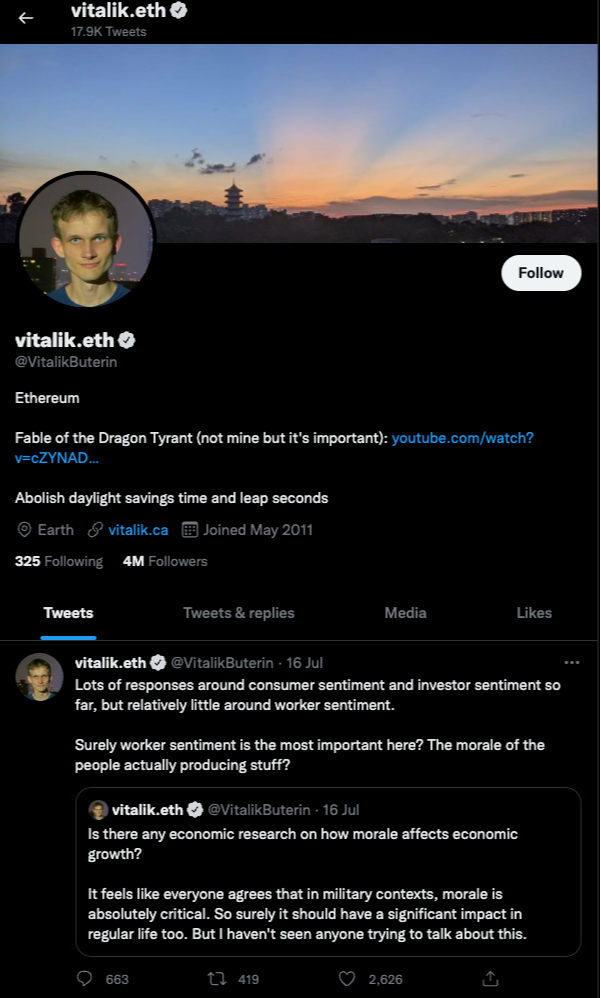 This is the Twitter profile of Vitalik Buterin. He joined Twitter in May 2011 and has 3.6 million followers at the time of writing.

Vitalik Buterin (born January 31, 1994) is a Russian-Canadian programmer best known for being one of the co-founders of Ethereum, a cryptocurrency.

Vitalik Buterin was born on January 31, 1994, in Kolomna, Moscow Oblast, Russia. He was born in Russia and lived there until he was six years old when his parents relocated to Canada in quest of better job possibilities.

Buterin originally learned about Bitcoin in 2011 from his father, and he grew increasingly interested in the subject until he launched the Bitcoin Magazine in late 2011. After writing for a publication named Bitcoin Weekly, which paid him five bitcoin per article, Vitalik Buterin was approached to co-found this magazine and join as one of the major writers after it shut down due to declining revenue. Bitcoin Magazine is regarded as one of the world's first significant journals on cryptocurrency.

Buterin walked out of college in 2014 after receiving a $100,000 grant from the Thiel Foundation to work on Ethereum full-time, as his interest and work in cryptocurrencies developed. In 2013, he published a white paper outlining his Ethereum concept, which drew a lot of attention and led to the project's launch in January 2014. After multiple beta releases and stress tests, the Ethereum platform was made public in July 2015.

With a market capitalization of approximately $246 billion, Ethereum is the world's second-largest cryptocurrency.

The cryptocurrency has a wide range of applications and adoptions around the world, as its underlying blockchain technology, which employs smart contracts, is incredibly beneficial and has already assisted a number of industries in transforming their operations.

Vitalik mainly tweets about Ethereum related topics and the current development or improvement ideas. His tweets are generally more technical than these of other vital persons in the crypto landscape. Vitalik also expresses his opinion relating to global politics.