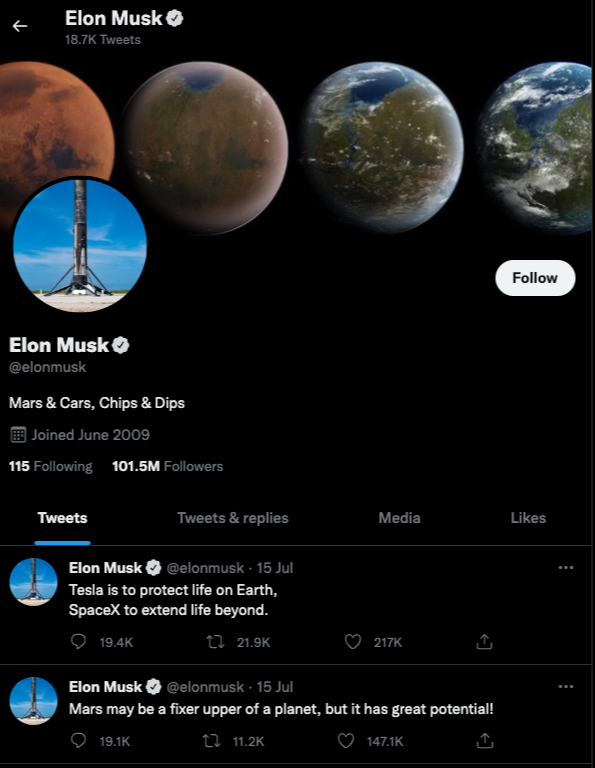 This is the Twitter profile of Elon Musk. He joined Twitter in June 2009 and has 81.9 million followers at the time of writing.

Elon Musk (born June 28, 1971, in Pretoria, South Africa) is a South African-born American entrepreneur who co-founded PayPal and established SpaceX, a launch vehicle and spaceship manufacturer. He was also one of the original major investors and the CEO of Tesla, an electric car company.

Musk has long believed that mankind must evolve into a multi planet species in order to survive.

His vision is to make it possible for the first people to travel to Mars in the following years and establish a self-sustaining base station. Space X produces reusable rockets for this cause.

His net worth is estimated to be around 273 billion dollars at the time of writing.

He tweets mainly about developments and interesting facts from his companies. He also likes to tweet about new scientific findings and achievements. He himself and his company Tesla own Bitcoin and he sometimes shares his opinion about the cryptocurrency space.

After a debate discussing the environmental impact of Bitcoin mining, he was a proponent of using Dogecoin as digital currency for payment solutions.

In between, there are interesting tweets about human behaviour and psychology.

Last but not least, he throws in some troll and meme posts.