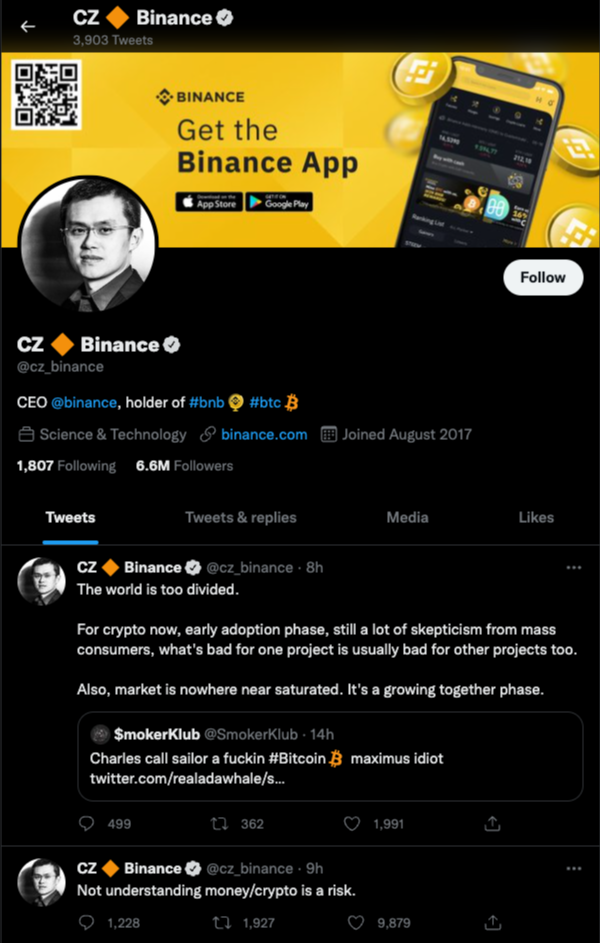 This is the Twitter profile of Changpeng Zhao, the founder and CEO of Binance. He joined Twitter in August 2017 and has 5.6 million followers at the time of writing.

In the crypto space, he is often called CZ. CZ was born in Jiangsu, China, on September 10, 1977, and migrated to Canada with his family when he was a child.

Zhao was a part of the Blockchain.info development team and also served as the chief technical officer of OKCoin. In 2017 he founded the cryptocurrency exchange Binance.

Binance was able to acquire $15 million in an initial coin offering after founding the cryptocurrency exchange in July 2017, and the platform began trading eleven days later. As of April 2018, Zhao had grown Binance into the world's largest cryptocurrency exchange by trading volume in less than eight months. Zhao also founded the blockchain network Binance Smart Chain, which has made a significant contribution to the decentralised financial industry's development.

CZ tweets about cryptocurrency in general, but his focus is on his exchange Binance, the BNB coin and the Binance ecosystem.