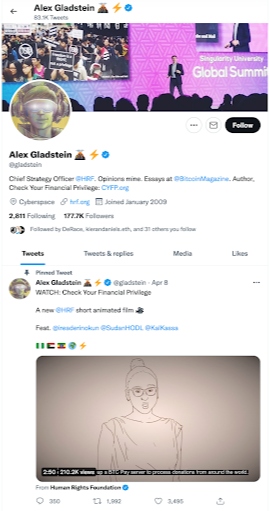 This is the Twitter profile of Alex Gladstein. He joined Twitter in January 2017 and has 177k followers at the time of writing.

Alex Gladstein is the Human Rights Foundation's Chief Strategy Officer. Since its founding in 2009, he has also worked as Vice President of Strategy for the Oslo Freedom Forum.

In order to promote free and open societies, Alex has brought together hundreds of dissidents and civil society groups with business leaders, technologists, journalists, philanthropists, policymakers, and artists.

The Atlantic, BBC, CNN, The Guardian, The New York Times, NPR, TIME, The Washington Post, WIRED, and The Wall Street Journal have all published Alex's work and thoughts on human rights and technology.

He's lectured at schools ranging from MIT to Stanford, briefed the European Parliament and the US State Department, and now works as a professor at Singularity University and an advisor to Blockchain Capital, a major fintech startup business. He frequently lectures and writes about the importance of Bitcoin for freedom, and in 2019 he co-authored "The Little Bitcoin Book."

Alex tweets mainly about finance and the crypto space. He is very fond of Bitcoin and often highlights the leading edge that bitcoin has compared to the other major coins regarding decentralisation. Another important factor for him in relation to Bitcoin is the censorship resistance and the freedom of each individual to be responsible for their own financial assets.